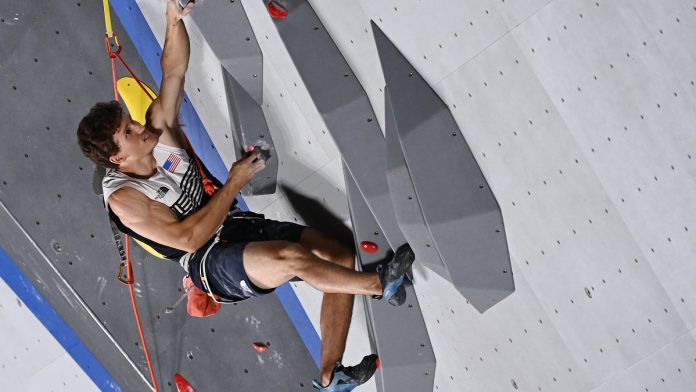 After three grueling rounds of competition in speed climbing, bouldering, and lead, the male climber who would take home the gold medal in sport climbing’s Olympic debut all came down to the final competitor of the night: Jakob Schubert.

Schubert, 30, is Austria’s best competition climber, a three-time world champion with at least 22 World Cup victories. Alongside Tomoa Narasaki of Japan and Adam Ondra of the Czech Republic, Schubert was considered a favorite to win it all. However, due to the unpredictable nature of the controversial combined format—in which the final results of all three disciplines are multiplied together to determine the ultimate results—no one was precisely sure who would win.

If Schubert managed to surpass the highpoint of Spain’s Alberto Ginés Lopez on the lead wall, but then fell below Ondra’s high point, then Ondra would win gold. If he fell below Ginés Lopez, then the Spanish climber would win. (If this makes no sense, you’re not alone.) Instead, Schubert crushed the route and became the only person to reach the top.

Yet even Schubert had no idea what his successful ascent meant: “After I topped out, I didn’t even know that I had the medal. Only after our national coach Reini Scherer pointed out to me that I was third could I believe it. What a moment. I won’t forget anytime soon,” he said in a press release.

It’s hard to say what is more shocking: that 18-year-old Ginés Lopez—a relative unknown on the comp scene with one seventh-place and two fifth-place finishes in World Cups earlier this year—is the first-ever sport-climbing Olympic champion, or the conspicuous absence from the podium of Ondra, who is widely considered the best rock climber in the world, and Narasaki, an absolute monster with a world championship title and the holder of the Japanese speed record with 5.73 seconds.

This surprising result is a function of the combined format—which many climbers grumbled about when it was first announced in 2016. In response to the International Olympic Committee allotting sport climbing only one medal for the 2020 Games, the International Federation of Sport Climbing created the combined format as a way to showcase all three disciplines as opposed to choosing just one. The format would mean that speed climbing, considered somewhat gimmicky by most comp climbers, would be given equal weight to the more revered and established disciplines of sport climbing and bouldering.

Indeed, Ginés Lopez was the person who won the speed event. He came in seventh in bouldering and fourth in lead, which is a total score of 28 (1 x 7 x 4). Coleman came in sixth in speed, first in bouldering, and fifth in lead for 30 points. Schubert went seventh, fifth, and first for 35 points.

It’s easy to see how the results could’ve been totally different had a number of factors gone in another direction. If, for example, Bassa Mawem—who took first place in speed in the qualifying event on Tuesday and, in doing so, set the current Olympics speed-climbing record of 5.45 seconds—hadn’t torn his biceps later on during the qualifying lead event and thus withdrew from the finals, or if Narasaki, perhaps the best speed climber of the remaining finalists, hadn’t slipped and false-started in the final speed round, it’s unlikely that Ginés Lopez would be wearing the gold medal.

“There were so many elements, like Bassa not being there, that affected the results,” said Schubert in his press release.

Another irony is that Ondra, for whom speed climbing is a notorious weakness, had his personal best performance in that event with 7.03 seconds and a solid fourth-place finish. But then a sixth-place finish in bouldering and second in lead kept him off the podium.

“The route was really interesting and created emotion, but it required a lot of endurance, and Jakob Schubert had more,” said Ondra, according to a report by Natalie Berry of UKClimbing. Ondra praised the Japanese for organizing a great event. “It’s been a really nice time.”

This was the way the chips (and climbers) fell, creating an objectively exciting—if difficult to follow and seemingly capricious—event.

A few of the climbers who didn’t make finals hinted, albeit as graciously as possible, that they were miffed by the format.

On Instagram, German climber Alex Megos wrote, “The Olympics are over for me. With a 9th place I’m the first one who didn’t make finals. Frustration and disappointment are the first two words that come to mind when I think about my performance. And for now there is not much else to say. At some point I’ll probably write more about the whole process, my doubts about the Olympics and the format and the time in Japan itself. Good bye Japan.”

“I waited [for] this moment for two years and now it is finished leaving a sour taste,” Italian Laura Rogora wrote on her Instagram.

For better or worse, this will be the last time we see the combined format in the Olympics. In 2024, each discipline will receive its own medal.

Tomorrow is the women’s finals. And if what we just saw is any indication, it’s anyone’s Games to win or lose.

The whole lot Im Going To Do Enhance My Blood work...

Right here’s a listing of Allen’s most up-to-date park, path and...

Out of doors Health Park opens in Downtown Fort Wayne