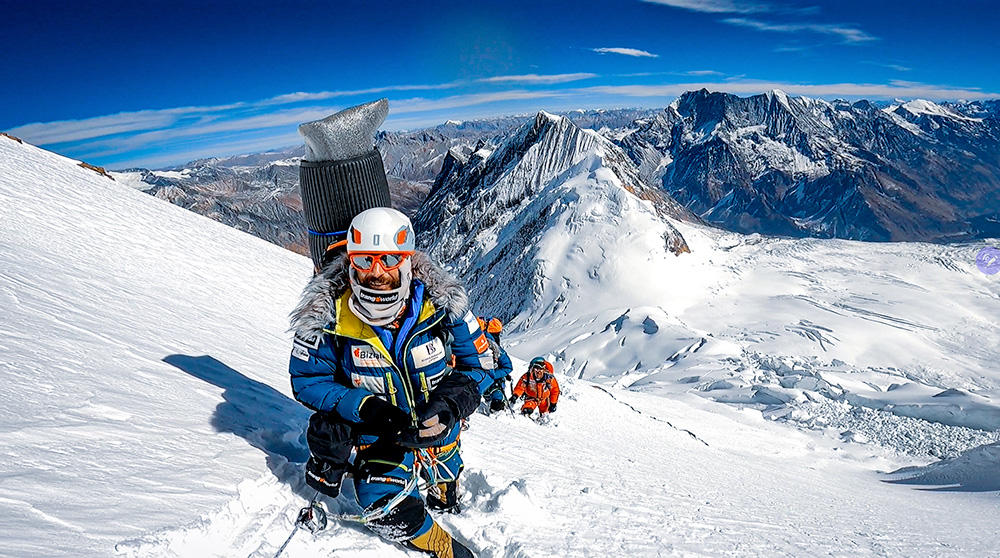 Basque mountaineer Alex Txikon recently returned from an attempt to climb Manaslu in winter. An expedition which ended without the hoped-for success but which, once again, teaches us to ‘find more important goals than the summit.’

Basque mountaineer Alex Txikon recently returned from an attempt to climb Manaslu in winter. An expedition which ended without the hoped-for success but which, once again, teaches us to ‘find more important goals than the summit.’

Alex Txikon has returned from his Manaslu winter attempt. With Inaki Alvarez and four Sherpa he turned back at 7050m. Then the weather, the strong winds, didn’t give him another chance. So the expedition, which also included Simone Moro (his friend and climbing partner on Nanga Parbat) packed its bags and returned home without having tagged the summit.

This might seem like a “non-story”. In truth though, for these mountaineers who have chosen to climb the Himalayan peaks in winter every step, indeed every climb, is part of a wider picture that began much earlier. It is a long path that unites them and that also gives meaning to the greater whole.

Txikon is known for being a tough nut. One of those mountaineers who don’t give up easily. Perhaps because he is Basque. But also, and perhaps even more so, because he is the last of 13 children; yes, he’s capable of suffering. And he knows how to set himself a goal, and not let himself become demoralised. Furthermore, ever since his early childhood he has been driven by an immense love for mountaineering and rock climbing (up to 8a).

It goes without saying that these characteristics, this combination of love for the mountains and the ability to suffer, render him one of the world’s strongest Himalayan climbers. One who is only at ease if he’s on an expedition or, throughout the rest of the year, if he can think about and prepare for his next project on one of the highest mountains in the world. His resumé speaks for itself: the first winter ascent of Nanga Parbat (in 2016 with Muhammad Ali Sadpara and Simone Moro) plus another 11 x 8000ers. His first, Broad Peak, was climbed in 2003 when he was just 21. Then, in rapid succession, Makalu and Cho Oyo (2004), Shisha Pangma (2007 and 2010), Dhaulagiri (2008), Manaslu (2009), Annapurna (2010), Gasherbrum I and II (2011) and Lhotse (2013).

Clearly though his “pivotal climb”, the ascent with which he helped shaped mountaineering’s rich history, was the first winter ascent of Nanga Parbat. Nothing though comes about by chance, indeed, Alex’s winter dimension had begun years beforehand. He likes to joke that having been born at the end of winter in 1981, it was written in the stars that he’d become a winter specialist. We believe that his love for the cold season, or rather, his predisposition to a certain amount of suffering, gradually matured and grew stronger over time. Starting with that winter attempt of Gasherbrum I in 2011. And followed immediately the next year by an attempt on nearby Gasherbrum II, during which he lost three climbing partners.

Then came the first winter ascents of Gasherbrum South (7,109m), Laila Peak (6,096m) and the historic Nanga Parbat success. These were followed by the second winter ascent Pumori (7,161 m) and a winter ascent of Ama Dablam (6,812 m). Above all though he made 3 attempts, in 2017, 2018 and 2020 to Everest and, in 2019, to K2. Always strictly in winter. It’s as if to say that Txikon, in the 4 years following his Nanga Parbat success, raised the bar when it comes to “suffering” and “resistance”. A terrible four-year period of winter attempts (utterly extreme and beyond the limit) marked by failures.

Once again it is from here that one must start, from theses failed summits, in order to try and comprehend these mountaineers and what drives them. Their ability to persevere towards realising a dream that is anything but easy and, all too often, painful. So, if one thinks about it, maybe one can better understand what Txikon says about his Manaslu winter attempt. His ability to endure the impossible conditions (and isolation) of a Himalayan winter. For him, he says, everything is actually “Easy, thanks to the passion and motivation that drives us. But then, if we have to think about everything that happened this season, those five deaths on K2 … After Sergi Mingote’s death we descended to base camp, out of respect. Although we were far away on a different mountain, dealing with those moments wasn’t easy.”

And even if he does not show it, dealing with the death of Ali Sadpara on K2 a few days later was certainly extremely difficult, too. Especially since during those days 5 years earlier the highly talented Pakistani summited Nanga Parbat with Txikon. “It was a sad anniversary without Ali.” says Alex. And then “I prayed for him, Juan Pablo Mohr and John Snorri”. The other two who went missing forever this winter on K2.

This is the reverse side of the story of these winter expeditions. This, unfortunately, is an integral part of Himalayan mountaineering. Will Alex Txikon return? Will there be more winter ascents for him in the future? “Yes, I think so, but we’ll see in due course.” he replies “These projects aren’t easy, because when you set off you’re really motivated and want to reach the summit, something that I haven’t done since 2016. In the meantime I’ve learned to find more important goals than the summit. Joy, friendship, return all together This year at Manaslu I would have liked to extend my expedition to March, we tried to get longer permits, but it would have been extremely expensive. In end we decided to call it a day, but nevertheless it was a great experience.”

In search of glamour in tenting – Monterey Herald

Tying clove-hitch on the carabiner

Ford Confirmed off Its Explorer SUV on the Tallest Climbing Tower...