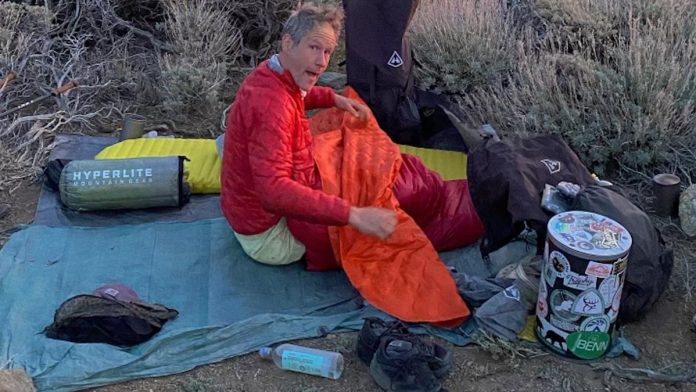 For someone who has spent at least a cumulative year tucked beneath the pitched corners of one tent or another, I recently experienced a troubling epiphany: I hated almost all of those nights. I’d been cramped beneath claustrophobic sheets of canvas or assorted high-tech fabrics and snoring recycled air on the shoulders of some mountain or in the bowels of some canyon. This realization, at least, arrived in the form of a new love, a primitive idea that has actually revolutionized the way I approach and enjoy hiking: cowboy camping.

“Cowboy camping” is exactly what it sounds like: sleeping (almost) on the ground and (almost) beneath the stars, much like the cowhands of yore. Whether driving cattle through the high desert of the Southwest or across the plains of the Midwest, cowboys would often carry an elaborate system of heavy quilts, blankets, ropes, and tarps lined with rings and snaps, tucking themselves away from the elements like human burritos in what they dubbed a roundup bed. “It is constructed to give the service and comfort demanded by hands working the range,” writes Fay E. Ward in her detailed history of cowboy customs, The Cowboy at Work, “and it must keep a person warm and dry in any kind of weather.

Each night not spent in a tent feels like a treat, the border between myself and nature itself thinner than a window screen.

But I long considered cowboy camping an emergency option, the last resort at the end of an exhausting day when I stopped hiking much too late to entertain pitching a tent. While thru-hiking the perpetually damp Appalachian Trail, for instance, I did it exactly twice, at the end of dual 30-mile days when I was racing through the final stretches of New England well after dark. Both occasions were near-disasters. The first time, a rainstorm pelted me while atop an open-air fire tower, soaking my stuff during a cold Vermont night. Several hundred miles later, at the base of the trail’s northern terminus, I’d thrown down my sleeping bag in the middle of a gravel parking lot the night before, mistaking it for a campground. Only then did I realize I’d cowboy camped—and, what’s more, eaten a PB&J by headlamp—atop a massive mound of fresh deer shit.

But, now, 1,200 miles into the Pacific Crest Trail, I have slept inside my tent fewer than ten times, trading its mere suggestion of safety for the manifold splendors of cowboy camping. Almost every night, especially in the PCT’s reliably dry desert section, I stretch a ground cloth across a flat expanse of dirt, throw a foam pad on top, and climb into my sleeping bag. The time it takes to set up camp—and, the next morning, break it down—has been cut in half.

I can now stretch and massage my tired legs without toppling the tent, cook without worrying I’ll turn its expensive white Dyneema fabric into a s’more. I can watch the sun set and the stars rise without leaving bed, and, burrowed in my bag, I don’t have to listen to wind rattle tent walls all night long. It’s less damp, less crowded, less smelly—all the things I realized I disliked about living inside a tent only after I stopped. No, I don’t worry more about animals, and, no, I don’t really miss the privacy a tent affords, since I’m already tucked into the woods alongside people I mostly know. (My wife, Tina, says changing clothes sans tent is slightly more difficult, surrounded by grizzled dudes, but it’s a skill she’s acquired.) Sleeping beneath the stars, paradoxically, offers more of the comforts of my actual bedroom, and it has turned camping, once my least favorite part of backpacking, into a real joy for the first time.

Cowboy camping is not just for extreme thru-hikers, either. It can be just as revelatory for the casual weekend car-camper as it is for the committed section hiker, a chance to commune with nature just a bit more intimately. With that in mind, here are five principles to start reinventing the way you camp.

Get a Ground Cloth

Between the steep passes of the Sierra Nevada, I recently met a mustachioed hiker named Cowboy Dave who insisted that the most pivotal piece in his cowboy kit was his ground cloth—that is, the barrier that separates you from the dirt. Ground cloths can be cheap sheets of crinkly Tyvek, paper-thin pieces of near-weightless polycryo, or ostentatious expanses of branded Dyneema. But for Dave, the size mattered most; his ground cloth needed to be big enough to hold both his body and his gear, so that the ground indeed felt like a home, full of his few belongings. He’s right, especially since you don’t want to climb out of your toasty sleeping bag first thing to gather your scattered things. Having a ground cloth that fits you is paramount.

Invest in a Sleeping Bag You Love

With or without a tent, your sleeping setup will mostly remain the same—neither your pillow nor your sleeping pad needs to change for cowboy camping. Your sleeping bag itself, however, becomes paramount. You should love climbing inside it, since it’s your last line of defense against everything else. For much the same reason, it should be as versatile as camping conditions themselves, as it will need to provide the flexible barriers your tent might have offered. There is no right answer here. Some cowboy lifers insist on synthetic fill, since it will dry quicker and even insulate in the event of unexpected rain—you know, a primary reason you have a tent at all—while others prefer the compression and breathability of down. The differences are infinite, tedious.

For my part, just before I began the PCT, I dropped more cash on a single hiking item that wasn’t a tent than ever before—a beautiful red Apache MF made by the longtime bastion of rugged sleeping bags, Western Mountaineering. I have never regretted the indulgence, especially in my new cowboy camping life. It’s so comfortable that I named it “Romy,” for the person who stitched it. Its deep hood and cushy down mean that I haven’t been cold even once. And its zipper allows me to unfurl it like a quilt on hot nights, so that I don’t feel like a clam stuffed inside a sopping shell. One night, when a light rain blitzed my wife and I early on the PCT in the Sierra Pelona Mountains, she wrapped herself in our tent to keep safe. But the slick coating of the Apache sheds water like a windshield, so I woke up dry from an oblivious sleep.

You can commit entirely to cowboy camping by forgoing a tent despite rainstorms or bug swarms. A bivy sack essentially does what tarps did for cowboys—wraps you in a second skin, and keeps out unwanted elements. But that’s advanced stuff, and this is a beginner’s course. So before you leave the tent in your bag, look for encroaching clouds. Think about how the winds and conditions have shifted during your day. And sit still for a spell, giving the mosquitoes a chance to target and attack their prey. All seem good? OK, leave the tent in your bag.

Have a Contingency Plan

The joy of hiking—really, the essence of all adventure—is its unpredictability. You will inevitably be surprised by a rain shower that wasn’t in the forecast or a horde of biting bugs that emerged only after you tucked into your cowboy quarters for the night. So think of your tent like the emergency exits on a plane: know where it is and how, in a pinch, to use it as efficiently as you can. If the rain is light, you might get away with wrapping yourself in your tarp, as I mentioned above. But should you need to pitch it in a hurry, make sure you’re sleeping somewhere with enough space for your tent’s footprint. And it’s a good idea to keep your headlamp and stakes handy, so you’re not scurrying about in a dark rain to get started.

In 2010, artist and astronomer Tyler Nordgren coined the slogan “half the park is after dark” to promote the nocturnal skygazing that the lack of light pollution in many national parks affords. Cowboy camping works in much the same way—you have traded the ceiling of your tent for that of space, so that you can watch the stars emerge as the sun fades. Stay up to look, and you’ll notice entirely new animal sounds, too, especially since you no longer have to worry about the noxious noise of tents rustling in the wind. There is an inherent if slight risk, from precipitation to critters and privacy-oblivious creeps to cowboy camping; witnessing the other half of a day, or of nature itself, is a righteous reward.

After a month or so on the PCT, we slowly climbed out of the desert and into the Sierra Nevada. I assumed our days of carefree cowboy camping in the arid desert had come to an end. It’s colder at those lofty elevations, with intense storms often in the forecast. And summer in the Sierra is the annual bacchanalia of feasting mosquitoes, which have been so aggressive this year that they’ve forced many of the most minimal hikers to don head nets or douse themselves with DEET like an androgenic teen bathed in Axe.

But bugs aside, both spring and summer have been mild here, with low snowpack and negligible storms. Most nights, we simply pitch a pyramid-shaped bug net instead of our tent, which remains ever within reach should a storm suddenly arrive. It feels like cowboy camping beneath a thin black scrim, the sunset and stars still visible, the air still as fresh inside as it is outside. Each night not spent in a tent feels like a treat, the border between myself and nature itself thinner than a window screen. I’ll be grateful for the tent, of course, the next time it shelters me from a storm. But I already regret the stale taste of its recycled air—and another night not cowboy camping.

The BLM’s Gradual Return to Normalcy

DICK’S Sporting Items Once more Chooses To Be Residence For The...

Why Dogecoin Was Climbing Right this moment

The Greatest Rental Rigs for Your Subsequent Street Journey

Dick’s Sporting Items takes as much as 40% off trainers: Nike,...