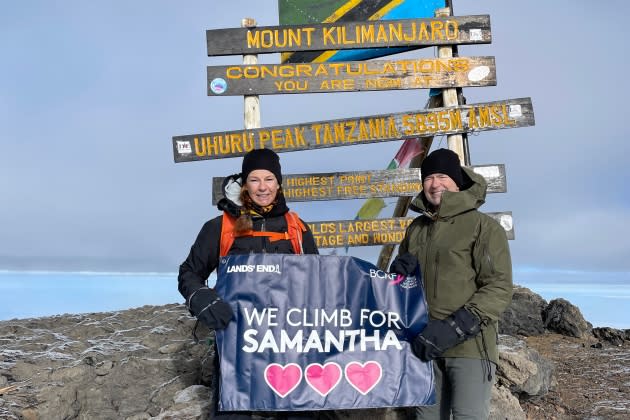 CLIMBING FOR A CAUSE: “It was the hardest thing I’ve ever done in my life – by far,” said Jerome Griffith, CEO of Lands’ End, of his seven-day trek up Kilimanjaro in Tanzania.

Climbing the highest mountain in Africa was not just a personal challenge for him, his wife Elke and two friends, all of whom were accompanied by porters and guides. It was also a mission to raise awareness and resources for the fight against breast cancer, a cause close to his heart. Last December, Griffith’s 32-year-old daughter Samantha was diagnosed with metastatic breast cancer.

“My wife has always wanted to climb Kilimanjaro, but she suggested that it be used to raise funds for the Breast Cancer Research Foundation,” said Griffith, who had returned from Africa last week.

Lands’ End employees also get involved in Breast Cancer Awareness Month this month by making donations and fundraising through activities such as walking, running, hiking and biking. Lands’ End will donate more than $ 100,000 this year to the BCRF, UK-based Future Dreams, and Germany-based charities Pink Ribbon.

“That last stretch alone, from 16,000 feet to the summit at 19,500 feet, was so tough,” said Griffith. “We started at 11:30 am with headlights and went up a 45-degree incline in the gravel. We were trembling. Our fingers were numb. Our toes were numb. It was minus 40 degrees Celsius. But that wasn’t the worst problem. It was very difficult to get a breath. At this altitude it is so thin and cold. You did your best to get that much oxygen into your system. I really couldn’t breathe. I fell asleep about an hour before the summit. At 5,500 feet, I thought I might not make the distance, but you tell yourself, soak it up and finish it. “

When asked why Kilimanjaro was chosen for the hike, Griffith replied: “It’s accessible. You have to be a real mountaineer to climb Everest. “

For altitude training: “We were in the Alps for a week in the summer. It was helpful, but the real test is mentally telling yourself to make it to the top. They really want to stop often. My daughter said, ‘Dad, don’t come back until you get to the top.’ “

After ‘insane’ Olympics Shauna Coxsey turns her consideration to mountaineering

UKC Information – NEWS: As soon as Upon a Time within...

The Inventory Market Is Climbing At this time. Is the Nice...