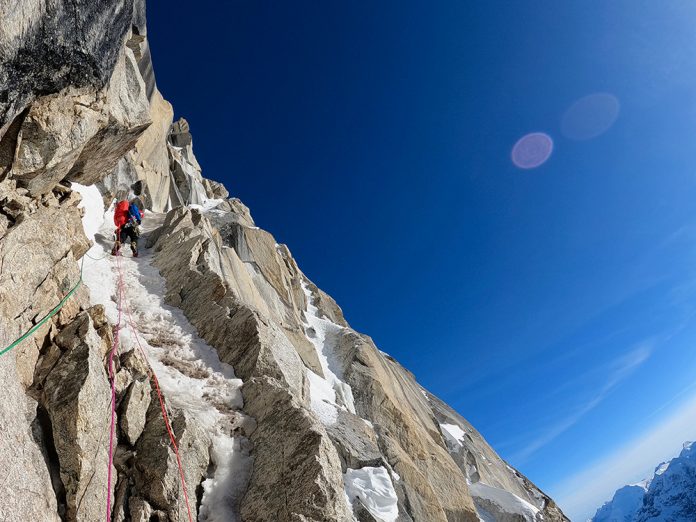 We are in the first month of what might be a journey of our life. Traveling and climbing along the whole “Panamericana” finally started for us and considering the situation we definitely feel privileged to be able to do it. This year we are staying in Alaska for three months and the first month already offered us both sides of alpine climbing. In the Revelations we got totally shut down because of weather and conditions at the start of April. After a short break in Seward, luck was on our side in Denali National Park.

After checking the walls along Ruth Glacier, Paul Roderick dropped us below Mt Huntington’s West Face as this seemed in the most promising conditions, from what we were able to see from the small airplane. After setting up base camp, we quickly went to work on the wall by climbing the Colton Leach route early the following morning.

We were relieved to encounter good conditions and progressed quickly on moderate ice, many times stretching the pitches up to 150m. Being quick payed off as the snow on the ramps in the middle section was still frozen when we reached it and enabled us to continue at a good pace. At the end of the ramps we “zig zagged” through the rocky section and climbed a short section of really cool, steep cracks up perfect granite to the snow flank above. On this we reached a trail from the party that had climbed the Harward route a couple of days earlier. We followed this smoothly to the summit ridge and along this to the top of Mt Huntington.

It was really calm and warm at the summit but we quickly started our descent as we hadn’t brought any bivy gear with us. We down-climbed the ridge and one more rope length from the ridge, and then rappelled making V-threads except from a few rock belays that we found. It was a rather straightforward rappelling and once in the west face couloir I kept looking at the steep wall towards the climbers left of us. The rock looked very solid but full of good looking cracks. The idea of climbing this part of the wall seemed very good but in that moment we didn’t seriously think of doing it as we were still busy returning to our tent in the last light of the day.

The next day we relaxed in the warm sun and started thinking about what to try next, and then we received a very promising weather forecast for three more days from Jack Tackle who is very kindly sharing his knowledge with us while we’re here in Alaska. Warm temperatures seemed perfect for that steep rock wall we’d seen on our descent. We even had climbing shoes with us in base camp, because we didn’t know where we’d end up on this trip. It didn’t take long for us to decide to give it a go after another rest day. This time we packed bivy gear, more Friends and also rock shoes. From what we saw, we thought we’d have to climb a few pitches of rock to reach an obvious mixed ramp system. For that same reason we decided to start late from our base camp in order to use the warmth of the afternoon sun for rock climbing.

A cloudless blue sky accompanied us when we left our camp for the second time at 11am on April 26th. We encountered perfect conditions the on initial snow slope that we shared with the West face couloir route and smoothly reached the steep wall just as the sun hit it. Where we started climbing new terrain we spotted a big heart feature on a blank granite face. It felt almost too sweet for us, a climbing couple, so we both laughed at the belay. Much to our surprise the crack system that seemed the most logical was filled with ice. It was a weird kind of ice, the same colour as the rock because of all the dirt in it. This is why we couldn’t see it from the distance. Rock shoes stayed in the backpack and we continued in full-on mixed climbing mode.

The climbing proved steep and almost every pitch had a kind of a boulder problem crux. Some of them quite powerful, but luckily with mostly decent protection. At that point water ran down the face and the ice became really rotten and slushy. It seemed like we gotten the last day of that window before the ice disappeared altogether. On the last pitch, just before reaching a rightwards trending ramp system, we had a first little shock when Ines pulled off a loose hold and barely managed to catch herself.

The ramp itself was climbed very quickly for half a rope length, but then I got stuck for quite some time on one of those boulder cruxes. I underestimated it and started climbing up it with a backpack. I inched myself upwards move by move, cleaning lots of useless snow and trying to find OK placements in thin ice, until I found myself in a really awkward position where I couldn’t take my backpack off anymore and clip it onto a runner. I started reaching as far as I could towards the first OK-looking bit of ice but I couldn’t reach it. I hammered the lower tool as deep as I could into the ice and grabbed its head. With this extra reach I barely reached the next ice, and thought I had it when it all broke and tumbled off. I was off, too, for a moment and I still don’t know how I managed to catch the lower tool and actually not fall. After a some heavy breathing I tried again and this time it luckily worked out.

The rest of the ramp went really well with some great ice and good hooking in the cracks until the very last pitch before the snow flank. This pitch took almost two hours of digging through the side of a huge mushroom, with quite poor and run-out pro. It was definitely the most serious pitch on the entire route, especially as it was already dark when we climbed it. After pitching two more sections we reached a perfect bivy spot below a big block. It was already 3 am in the morning and we felt tired, but a full moon came out and we couldn’t go to sleep for almost two more hours as it was so beautiful.

The next morning we left our bivy site with one backpack only and reached the summit of Huntington early, at 11 am. We sat there for almost an hour and couldn’t believe how warm it was; in whatever direction we looked we could only see wild Alaskan mountains, and we wondered about where our journey will take us now.

The descent went really smooth because we knew it already and we reached our base camp in the afternoon, ready for an early dinner. After checking with both Jack Tackle and Mark Westman, we figured out that we’d climbed a new route. After the initial snow slopes we climbed 20 pitches of new terrain before joining other routes on the summit snow flank. It is the feature that marks the start of our route perfectly that gave the route its name: Heart of Stone.

We would like to thank Jack Tackle and Mark Westman for their help and sharing their Alaskan knowledge with us.

House Sporting Items: Market Forecast to 2025 | Primarily based on...

Benchmade’s New Kitchen Knife Does It All