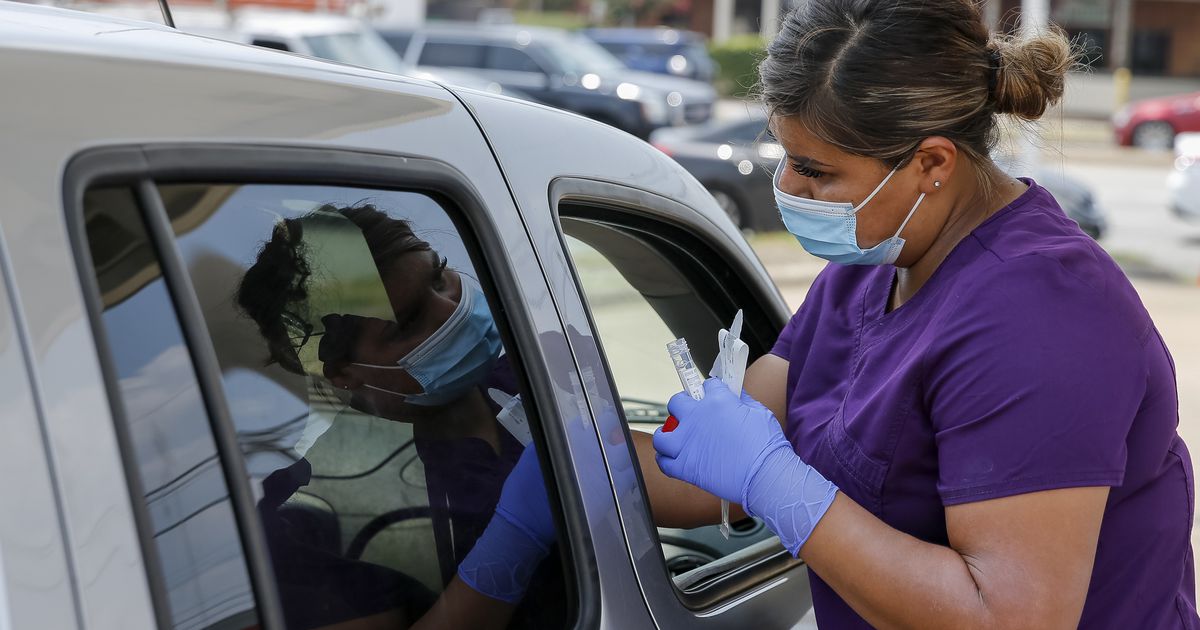 It’s a routine that Sonia Herrera has gotten used to since working on a COVID-19 testing site in December. She arrives around 8 a.m., puts on a mask and purple gloves, and sets off to wait for people to pull up.

A line of cars was waiting for Herrera to arrive at the YesNoCovid passage at an old gas station on Northwest Highway and Abrams Road in northeast Dallas for the past week.

On Tuesday morning, about 30 vehicles wrapped themselves around the site and spilled onto the street.

“I was very exhausted and overwhelmed,” said Herrera.

She said the website typically processes 30 to 40 tests for coronavirus a day. But for the past week they have tested more than 100 people a day – sometimes close to 200. Herrera said they had hired three more people to keep up.

The increased demand for testing comes from the increase in COVID-19 cases and hospital stays in North Texas. Since mid-July, Dallas and Tarrant counties have had total one-day cases and two-week averages for new cases higher than they have been since February.

President Joe Biden called Texas Tuesday and said the state had “the most extreme” measure banning mask and vaccine mandates.

“I’m telling these governors, please help,” said Biden. “If you don’t want to help, please get out of the way.

“I just wanted to be on the safe side”

As of Monday, 3,199,403 COVID-19 tests had been conducted in Dallas County, according to the state. Of those tests, 64,445 were from last week – the highest number of new tests in a week since early February.

The YesNoCovid testing site is in the same area near Lake Highlands where Dallas County Health and Social Services staff spoke to people one-on-one about the vaccination.

Recently, Dallas County raised its COVID-19 threat level back to Orange for the unvaccinated in response to rising cases and hospital admissions. The increased level means there is a moderate risk of spreading COVID-19, while the previous level – yellow – meant a low risk of spreading it in the community.

Kendra Thompson, 30, went to the YesNoCovid site with her 2-year-old son in a stroller Tuesday. She had attended a friend’s birthday party last weekend – the first outing she had taken since the pandemic began – and knew she wanted to go to the testing site afterward.

“I just wanted to play it safe because I have it,” Thompson said, pointing to her son. “When I got home I knew this was up the street.”

Thompson did not receive a COVID-19 vaccine. She said her family members were also not given injections because they were skeptical of them, but she would consider them if the vaccines got full FDA approval.

Rachel Eley, 22, from Dallas, has been fully vaccinated since February, but wanted to be tested “just in case”. She had noticed the recent surge in cases, and people around her recently tested positive for COVID-19.

Eley said she arrived on the YesNoCovid site around 8:45 am. She was still in line until noon, waiting for her result.

“It’s honestly first overwhelming and secondly a little worrying,” said Eley. “It scares me to see.”

But not all websites in the county have lines like the YesNoCovid site.

Arielle Perez, 18, was tested for COVID-19 at a Curative-managed kiosk in Far East Dallas that had little to no queue on Tuesday afternoon.

Perez said she wanted to get tested for COVID-19 because she was showing symptoms of the disease.

“This is like our third time we’re being tested because we’ve just come back from a trip,” she said. “We didn’t want to be frightened, but we showed symptoms.”

Perez said she first heard of the more contagious Delta variant and recent spikes in cases reported across the country when she came back from her travels.

She added that she has not yet been vaccinated against COVID-19 and hopes to get a vaccination soon.

“When I heard about the new Delta variant, I thought, ‘What the hell is going on?’ You know? It’s very scary, ”said Perez. “I thought everything was going well, but now it sounds like things are getting worse.”

Ahjanae Atkinson, 24, a mother of two, was also tested on the Curative site Tuesday. She said she wanted to get tested for COVID-19 after a family member she met at a funeral last week tested positive.

“Everyone should be tested just in case. You may not feel sick, but you could still have it, ”said Atkinson. “I’m fine, I just wanted to get tested to make sure I wasn’t spreading it.”

Atkinson said she has not yet been vaccinated against COVID-19.

“I had COVID-19 and I think I was just in no rush to get one,” she said. “I have to have it because my family is forcing me to have an injection.”

The average number of new daily cases in the county over the past two weeks is 651 – more than double the previous 14-day average of 263. This is the highest two-week average the county has seen since February 21 .

The county reported that 413 people were hospitalized with the virus.

Dallas County no longer publishes coronavirus data on weekends and instead reports three-day totals on Tuesdays.

Tarrant County reported one death and 508 cases on Tuesday.

The county reported that 636 people have been hospitalized with the virus, most since late February.

Across the state, 14,561 more cases were reported Tuesday, including 14,239 new cases and 322 older ones recently reported by laboratories.

The state reported that 7,305 people were hospitalized with the virus nationwide, including 1,783 in northern Texas. Both numbers were at their highest level since late February.

How Public Lands Plan to Take care of Crowds This Summer...

Reopening Ontario out of doors leisure websites ought to concentrate on...

KPCTA to put in tenting pods at 10 extra spots