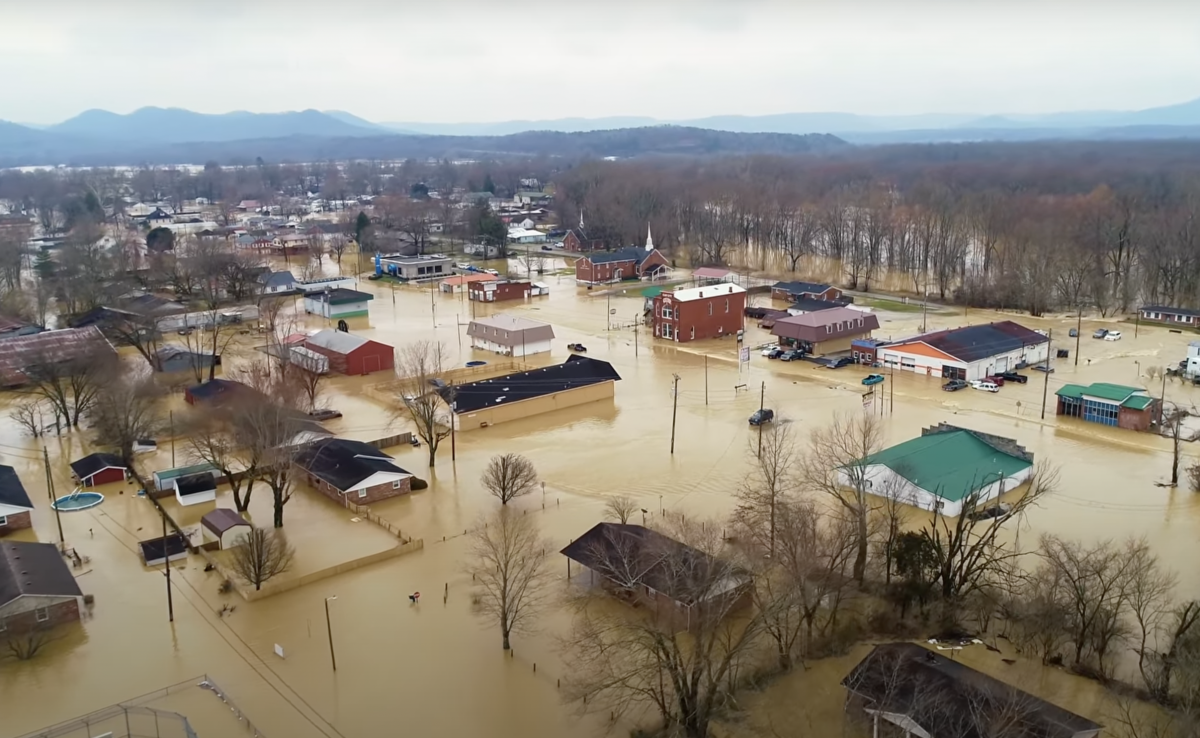 As February turned to March, the Red River Gorge area, Kentucky, saw nearly record-breaking water levels. Flooding ramped up March 1, following a weekend of heavy rain. The Red River rose eight and a half feet past the flood level to 25.69 feet, a height second only to the flooding of 1978. In Beattyville, just southwest of the Red River Gorge, most roads were six or seven feet underwater.

In Powell county first responders had to rescue over 80 people and were using boats to save residents from their flooding homes. In Wolfe County the Fire Department rescued 15 people from flooded cars and houses, even using a tractor with a front-end loader to save a family from their car that was trapped in the flood.

The floods forced residents to evacuate, left people displaced from their homes, and damaged properties and businesses. Lila Simpson created a GoFundMe on March 1 to help those impacted by the flood.

“The Red River Gorge region and surrounding areas have been devastated by flooding leaving many stranded without a home, food, and other resources,” wrote Simpson in her GoFundMe description. “We may not be able to rebuild homes and lives, but we can help provide food, money for temporary housing, gas, and other needs till folks can get on their feet.”

The GoFundMe has raised $61,291 of its $75,000 goal. About 1,300 people have donated. Many of them have connections to the Red through climbing and want to give back to the local community.

“I am happy to help and I hope the people and lives affected can recover quickly and fully. Climbing, and the Red, have given me so much,” commented one donor.

“Climbing in the Red has brought so much joy into my and my wife’s lives and the local community has always welcomed us with open arms,” wrote another.

The money raised will go to community charities and families in need of direct aid. Simpson has also been helping coordinate volunteering, passing eager volunteers’ schedules along to those in charge of clean-up organizations. In her GoFundMe update, Simpson wrote that she has been on calls with businesses and organizations, and went to a Powell county meeting to learn more about where the greatest need in the community is.

“This [the fundraiser progress] surpassed my wildest dreams and I have y’all to thank for that,” wrote Simpson in the update. “Thanks for the trust, for the love, and the compassion towards our people. I am working endlessly to not let our communities or any of y’all down.”

“We are incredibly grateful for our climbing community and your generosity,” wrote Muir Valley on its Facebook page.

The Foundation for Appalachian Kentucky also has a flood relief fund. Individuals, small businesses, and farms can receive Emergency Flood Relief Grants, and people can apply online for a $500 emergency grant by March 14. Appalachians for Appalachia has also created a resource database to organize areas of need.

21 unimaginable outside N.J. day journeys you may take proper now

Former Husky Mark Pattison Is At all times Climbing