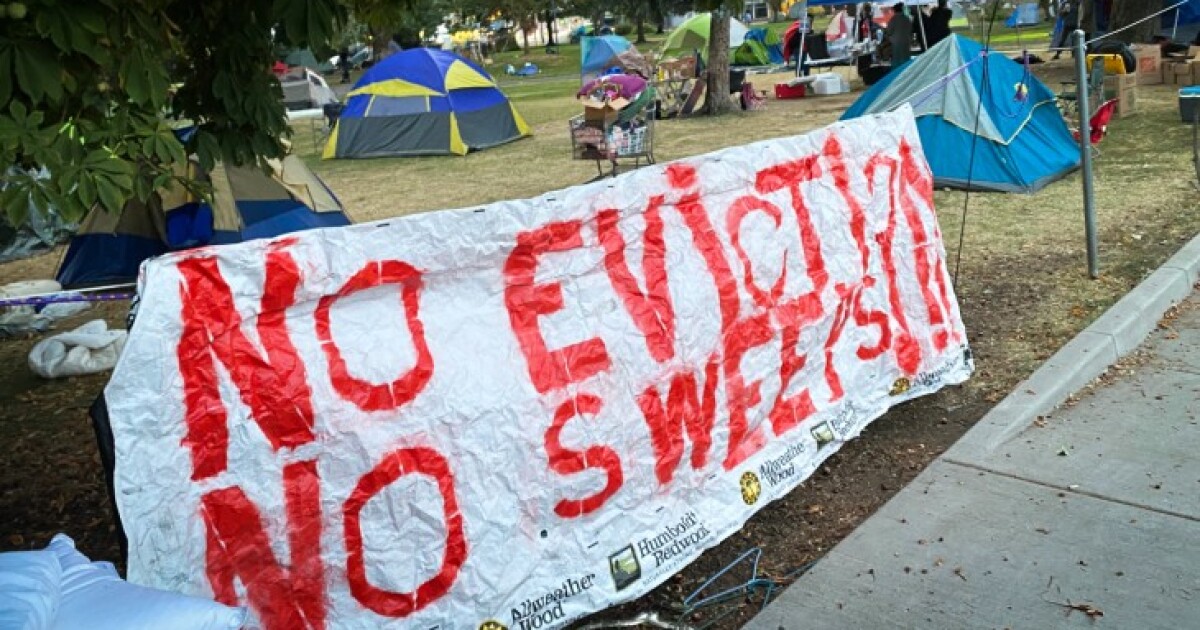 At a recent Jackson County Homeless Task Force virtual meeting, Assistant Attorney Eric Mitton explained why Medford is amending its ordinance, which currently prohibits any unauthorized sleeping or camping on public land anywhere in the city.

“Leaving the status quo is not an option for the city,” he said. “The regulation needs to be changed, it needs to be updated based on federal case law. The only question is how.”

The “federal case law” referred to by Mitton consists of two court rulings on legal proceedings known as Martin vs. Boise and Blake vs. Grants Pass. Simply put, the decisions mean that municipalities cannot punish people for sleeping outside if they have no indoor alternative.

As a result, the City of Medford Law Firm is looking to replace the existing citywide ban with regulations restricting public sleeping to certain times, locations, and routes that the city believes will pass the legal draft. In fact, Mitton said, the new regulation would allow outdoor sleeping that was previously illegal, such as in public parks.

“Indeed, this is the first time since at least 1988 that it is completely legal and an officer would have no reason to approach a person sleeping on a park bench in the middle of the night, even during hours that the park is closed.”

Homeless people are also allowed to sleep on sidewalks as long as they give pedestrians 36 inches of free space.

However, the proposed law would continue the current ban on the use of tents and sleeping in vehicles. It would prohibit staying in one place for more than 24 hours, and there are other restrictions that, according to homeless proponents, make the lives of already desperate people even more difficult.

Maig Tinnin told the task force the proposals were wrong.

Tinnin is based in Medford and helps organize volunteer programs for people who live on Bear Creek Greenway, a band of forest and brambles that follows Bear Creek along the floor of Rogue Valley. People with nowhere else to go tend to move into the relative privacy of the greenway to set up camp.

“We just lost thousands of buildings to the fires and we have people with money who can’t get into rental apartments. I don’t think it’s real to say that no additional barriers have been created to turn people into community. based living. How, living is not there right now. “

Medford offers a variety of services for the homeless, from the Kelly Dormitory to the tiny Hope Village cluster of houses to the Urban Campground who oversaw the tented camping. But the facilities are usually full or almost full, with waiting lists often long

Travis Greiner lives in a tent on the greenway. Speaking to Zoom on the Homeless Task Force, he said the proposed ban on the use of tents in particular would only make his situation worse.

“Just living on the street is very, very stressful and you age very, very quickly,” he said. “But to have the worry of law enforcement coming in the middle of the night to say, ‘Well, you have to go.’ I feel even more hopeless. “

Opponents say that a penal approach will not solve the problem of people living outdoors in public. Tristia Bauman is an attorney with the National Homelessness Law Center in Washington, DC.

“Laws that punish universal and unavoidable behavior by undocumented people in public spaces are ineffective in reducing the number of people living outside,” she said. “In fact, they have the unintended consequence of entrenching homelessness. They make it harder to escape.”

Bauman’s group led the landmark Boise lawsuit and was also implicated in the Grants Pass case. She told the Homeless Task Force that she believed the city was also in danger of putting itself in legal danger.

“Categorical bans on tents and vehicle shelters that don’t have an emergency declaration or that can’t get into urban campsites that don’t already exist are prone to challenges.”

In fact, a group of local lawyers have just announced they will sue Medford if the city council adopts proposed amendments to the ordinance, and unaccompanied individuals and activists have repeatedly demonstrated outside city buildings in opposition.

Medford City Council is expected to vote on the measure at its meeting on Thursday evening.

Opinion: Ontario closing out of doors recreation is unhealthy for our...

Solo In a single day Constructing a Bushcraft Camp With Furnishings...

Examine finds document outdoor-going in 2020 together with ‘troubling’ developments |...

Automobiles submerged on account of flooding alongside highway to widespread Squamish...

The enhance of an out of doors financial system in York...

The Greatest Tenting Chairs for Your Out of doors Adventures