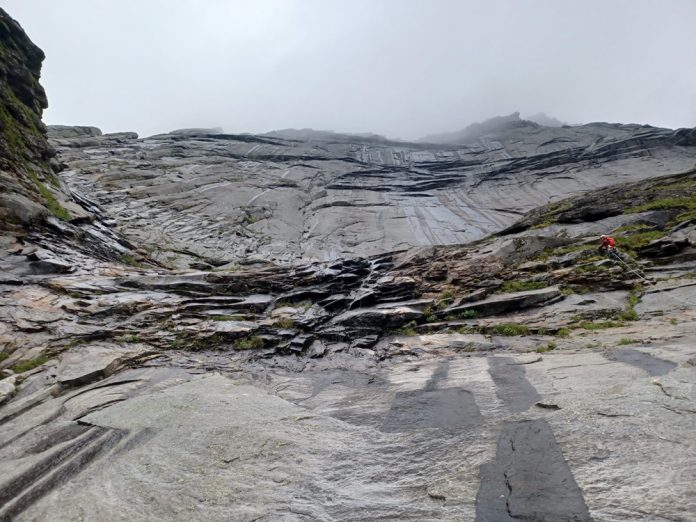 Juho Knuuttila (26) from Finland and Misha Mishin (27) from Russia have established Ørneeggen, the first climb up the West Face of Mt. Storskiva (848m) on the island of Moskensøya off the Lofoten islands in Norway. Knuuttila reports about the ‘true adventure climbing’ they experienced in August 2021.

The Lofoten islands in Norway are famous for their beauty and good granite climbing above green grass slopes and the blue waves of the Atlantic ocean. After an expedition to warm and dusty Pakistan in mid summer I felt like I was in a paradise when I arrived on the Lofoten islands in August.

For the first few weeks I climbed only gentle classics and did some scrambles like the ‘Ersfjord traverse’ in Kvaløya with my friend Jukka. Nothing too daunting after an expedition to the Greater Ranges and a lack of rock climbing fitness.

In 2020 I had spotted a cool looking face from satellite images, located on the island of Moskensøya, in the far west corner of Lofoten. It seemed very remote and hard to reach due to steep sea cliffs guarding the approach on both sides of the shore. After some more searching I was able to find only one picture from this face, taken from a boat. It showed a magnificent spur splitting the slabby face in half. It just begged to be climbed.

Back to August 2021. After a series of unplanned events I teamed up with Misha Mishin, a Russian climber who lives in Finland, but who was now working at Lofoten and was free for a weekend of climbing.

On Friday evening we drove to Reine and took a boat to Vinstad from where we were supposed to start hiking to the face. It was very rainy and in the end we decided to sleep in a waiting room at the Vinstad harbour, instead of in our tents. A bit like climbing bums, but we kept the room tidy.

On the following morning we started hiking at 6am, carrying only small backpacks. We followed a faint trail over a mountain pass to the Hermannsdal valley in order to reach the west coast of Moskensøya. Then we followed the shore line up north for 1km, climbing over sea water canyons and steep grass slopes. By sheer luck it was doable and way less tiring than we’d imagined.

The West face of Storskiva (848m) looked quite intimidating from the shore. Its left side is probably the steepest in Lofoten, while the right side vaunted an equally imposing slab with some roofsIn the middle of these two lay the spur, with only continuous-looking crack system on the entire face. That was our line.

To get to the spur proper we needed to climb four pitches on broken slabs heading slightly left. Not difficult technically, but the slabs were very compact and the protection poor.

It was noon when we started up the main spur. The next eleven pitches provided some very varied climbing. The rock was some of the best I have seen, but the main problem was grass in the cracks which made climbing very bold and slow. On some pitches we needed to dig out every gear placement and on some we were hand jamming and pinching tufts of grass or scratching mud pockets to stay on the wall. The nut tool was our best friend.

Here and there we encountered some faster free climbing pitches, but the going was mainly slow, changing from easy aid to bold slabs. Often we needed to lower the leader down to pick up more gear to be able to complete pitches just 30m high.

Having said that, we were also very lucky that the crack system ran straight up and that we didn’t have to do any big traverses. It would be a three-star free climb without all the moss in the cracks.

The location was amazing, with eagles flying above our heads, waves of the Atlantic Ocean raging all the way from the North Pole, and no mobile phone reception to be found anywhere. True adventure climbing. The wind was very cold though which made for good friction, but we were freezing.

At 23:00 we reached a big grass ledge and thought the climbing would be over, but we still needed to do one exit pitch to reach easier terrain. Once again we were lucky that we got through the rock barrier on our first try as it was already pitch dark and we had no clue which crack would lead us upwards.

After midnight we did the last hiking part to the top of Storskiva and started descending straight away. It was misty and finding a way down with a GPS phones was the only option.

We reached the harbour at Vinstad at 4am on Sunday, after 22 hours on the go and crashed out on the floor in the waiting room, only to be woken up by Swiss hikers few hours later.

We named the route Ørneeggen (Eagle Spur) and encountered difficulties up to N7 and C1 (circa 6c+ trad, A1 aid, Ed.) in 15 pitches of climbing. No gear was left behind.

It was the first ascent of the west face. Due to the nature of the climbing we don’t see a purpose for a detailed topo online, but if you are interested you can find one at Klatrekafeen at Henningsvær. Ørneeggen could be an great option for those seeking wild adventure and isolation. We truly found this!

Examine goals for suggestions on outside recreation on Albertan Crown lands

A Determined Want for the Mountains

Southeast Michigan advocates pursue accessible outside recreation for folks of all...

Discuss continues on out of doors amphitheater in Steamboat

A Determined Want for the Mountains

Carry A lot of Grocery Luggage With a Carabiner Simple Tip...

Visited mountains not too long ago? If sure, we invite you...

Exploring the causes of #frostbite The upper we climb, the colder...