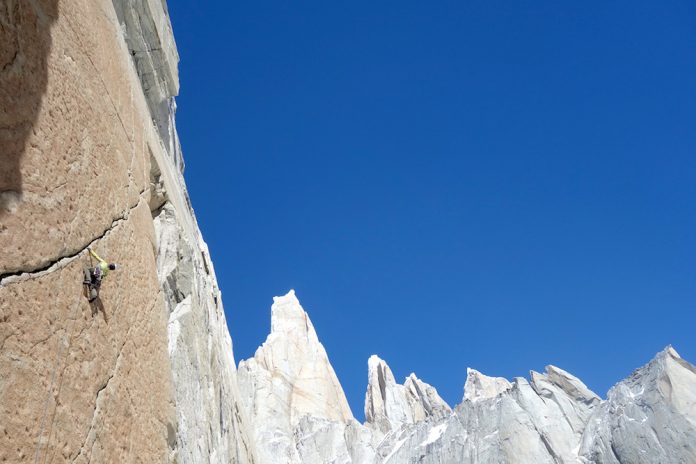 The report by Belgian alpinist Seán Villanueva O’Driscoll who this season has established two new rock climbs on the north face of El Mocho in the Cerro Torre massif in Patagonia: Chalten Sin Clecas (Chalten without tickmarks) with Mecha Rocamor and Chalten sin Chapas” (Chalten without bolts) with Matías Korten.

Just like Moses through the Red Sea, we found a splitter diagonal crack cutting through the big red shield of granite on El Mocho. The climbing was so good there was no doubt that this pitch had been created just to be climbed! It was late December 2020 I had hiked into the mountains with Mecha Rocamor. The forecast had predicted high winds at altitude, so we’d decided to try something on El Mocho, one of the lower peaks, below Cerro Torre.

A little higher up however the Red crack closed, my heart sank and my balls shrivelled. It looked too committing to climb without bolts, so we backtracked a few pitches and climbed up the obvious dihedral to the left. We were attracted by a roof above, which included a sequence involving a foot-cut-loose on perfect hand-jams move to a heel-hook-mantle. It felt insane to be hanging off a hand-jam in a roof, with Cerro Torre and Fitz Roy in the background! After 5 tries I redpointed the pitch.

We named the route Chalten Sin Clecas (Chalten without tickmarks) because I had been complaining a lot to the local El Chalten climbing community about the tick-marks that were appearing on boulders and sport climbs, robbing me of my onsight and stealing me of my pleasure to read the rock! I had been teasing them that I was going to start a petition on “ChaltensinclecasDOTcom”. I passionately hate tick-marks! And if the name makes people think about it for a second, then that’s great.

Somehow that perfect “Red Crack made-for-climbing” kept calling me, so I returned in January with my friend Lucas Rubiolo and a bolt kit. When we reached the highpoint of my previous attempt, my heart sank again and I apologised to Lucas for having brought him there, it seemed obvious that this was a dead end.

But since we were there I decided I would give it a try. And when I started climbing, pods and hidden pockets appeared every few meters, giving me the chance to place protection and providing me with just enough confidence to continue! Then there was a branching and we had to choose between going left towards a finger roof crack, or going right into a blank-looking dihedral. We chose the finger roof-crack, which I redpointed after about 5 tries at about 7c.

Higher up however the crack closed once again and the rock turned into decomposing kitty litter. We pulled out the bolt-kit, but in my heart I couldn’t get over murdering the impossible so, not wanting to place bolts, we bailed and headed back down to the ground. The next day we did the first free ascent of “Grey-Yellow Arrow” opened in 1989 by a Slovenian-Italian team, also on the North Face of El Mocho. An awesome high quality climb!

Even after I had completed the Moonwalk traverse across Fitz Roy and El Chaltenense on the mountain’s south face, that “Red Crack” kept calling me. After all, it was made for climbing, there simply had to be a way to the top!

So at the end of March I hiked back up to Niponino base camp, this time on my own, and there hanging in the middle of El Mochito wall found Mati Korten, opening a new route completely by himself! He been up in the mountains for a week, and had spent 2-3 days hunkering down in his tent due to bad weather. I played a tune on my tin whistle which got his attention, and he rappelled down thinking “Damn! Sean probably wants to do a climb with me tomorrow! That likely means hard climbing and suffering”.

The next day we climbed back up the Red Crack, past the improbable section and we then chose the right branch that led to the dihedral. Strong winds blowed a waterfall in our direction getting us soaking wet! But somehow we managed to push on through and find a beautiful path to the summit.

I named the route Chalten sin Chapas (Chalten without bolts), as a kind of joke, because it’s a “next step up” to no tick-marks; I’d told the local El Chalten climbing community that that was going to be my next petition. But I also wanted to draw some attention to the fact that people are getting so used to bolts, there is absolutely no hesitation, no thought going into the process of placing a bolt.

I feel like sometimes bolts appear in places where they are completely unnecessary, because there are many natural alternatives. I feel like placing a bolt is making a scar on the rock, not too unlike chipping holds, and it is not something that should be taken lightly just because it is “convenient” and fast to place with a drill.   There is something beautiful about those climbing areas in, for example, Ireland and the UK, where there are no bolts. Unfortunately a lot of people have never experienced that and they don’t have this vision.

Nevertheless, who am I to impose my opinion? I might be completely wrong about the whole subject. But if the name gets people thinking about it for a second, then I’m a happy man!

Excited about buying and selling choices or inventory in Dicks Sporting...

Officers collect to debate regional method to outside recreation – Illinois...

Outside exercise courses in distinctive places to attempt on Lengthy Island

This climbing rose’s flowers have a good time the Fourth of...