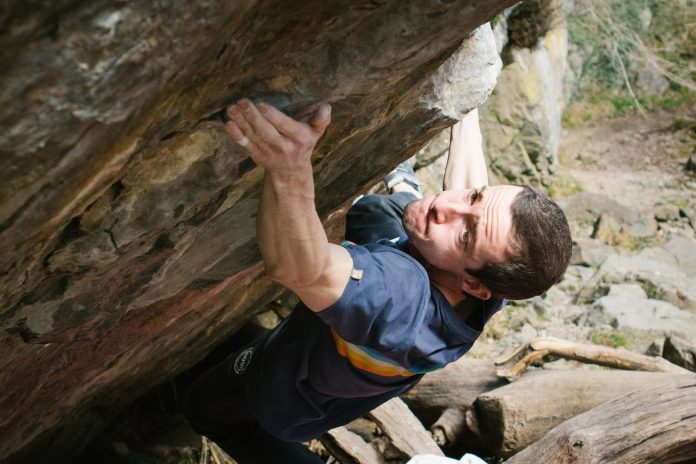 Eliot Stephens has climbed the first Font 8C in Wales by adding a sit start to The Origin at Dinas Rock, a Font 8B+ he climbed in 2019. He has climbed multiple Font 8C problems abroad but this is his first in the UK.

The sit start adds five moves at around 8A+ before it joins the existing problem a couple of moves in. Eliot told UKC:

‘It’s essentially linking two pretty powerful problems back to back. Probably an 8A+ and an 8B. The very first move is one of the hardest undercut moves I’ve done, just pulling up off two pretty miserable undercuts above your head in a roof. Then it moves into more powerful moves on a poor crimp and a bad sloper.’

After this, Eliot had the crux of The Origin to contend with; a long pull off a tiny right-hand crimp before more hard undercut moves. It sounds like concentration is key on the top section with five moves that are ‘very off balance’ on the vertical headwall. 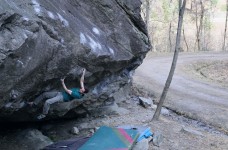 
Eliot attempted the sit start moves for roughly four sessions whilst refining the stand start that he’d completed in 2019. Even once he had linked the sit start into the stand, it took him another seven sessions to complete the project.

‘It was one of those problems where once I’d done all the moves, I knew it would be possible. But I also knew it would require me to just show up a lot. None of the moves are really top end, besides the first, but the first 10 are all consistently hard on their own so adding them all together I knew would be a task.

‘For the level, this problem was for me, I had to have most things, weather, skin, sleep, energy, on my side to do it but fortunately not everything and the kitchen sink.’

Despite climbing what is likely to be Wales’ hardest boulder problem, Eliot doesn’t believe it was a special moment in terms of his climbing. The nature of the problem meant that he knew it was only a matter of time before he climbed the problem: 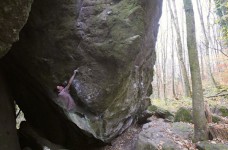 
‘I just went through the motions. When you’re used to projecting abroad, doing it at home is a much more relaxed process. The go I did it was at the end of the session and the sun had just come out, which usually ends a session. So maybe the classic ‘no expectation send’ was at play? I just had to arrive at the crux that little bit fresher and then not fumble the top, which I was lucky enough not to do.’

This was the 29-year-old’s 3rd Font 8C after climbing Arzak and From Dirt Grows the Flowers, both in Switzerland. He’s been an important figure in the South Wales bouldering scene for several years and has continued to develop the hard bouldering in the area. Earlier this year, he climbed a new Font 8B at  Neath Abbey Quarry, another area which he has developed extensively.

A 450-Mile Bike Tour Round Wales

The outside are so white. This is how Lena Waithe and...