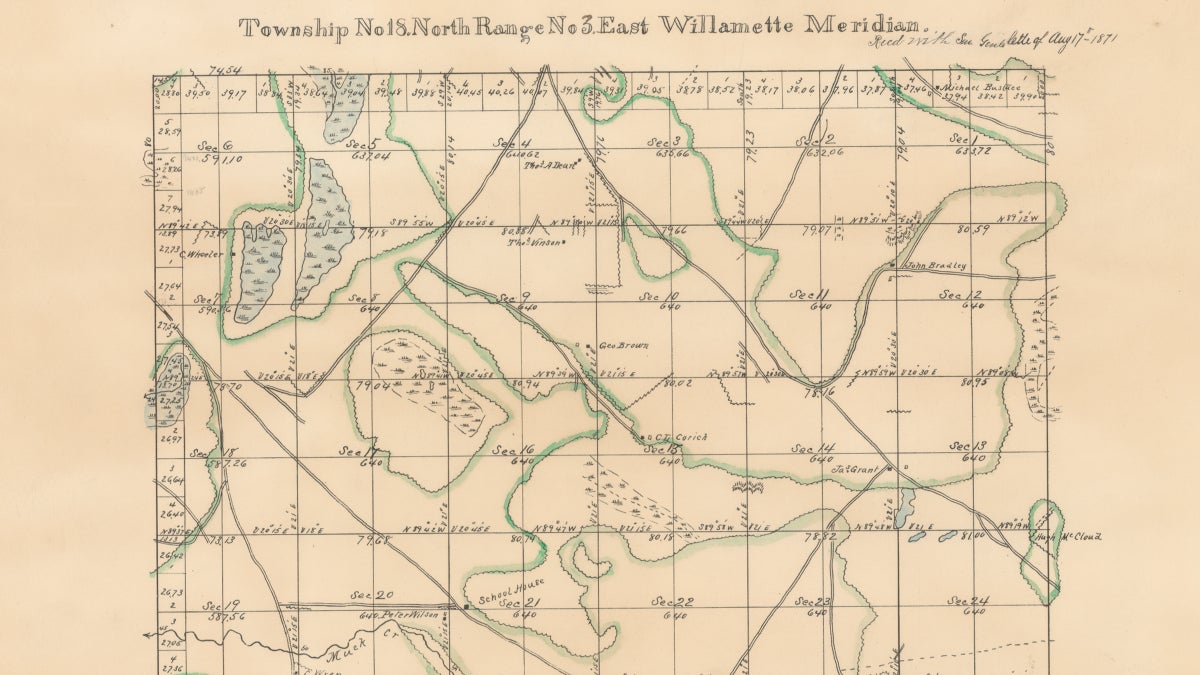 In 1785, President Thomas Jefferson embarked on a mind-boggling endeavor: to map the entire western U.S. With no advanced technology available, teams of surveyors fanned out across the country with 66-foot-long chains—80 chains made a mile—to create square-mile sections. The surveyors marked the corners of each section with whatever was geographically convenient, such as cedar posts in the Northwest and piles of rocks in Arizona. They made notes and took sketches of the surroundings, checked the stars to ascertain their latitude, and sent the coordinates back to the land-survey office in Saint Louis.

Over 200 hundred years later, we are still using these measurements to delineate federal, state, and private land boundaries. If you’ve ever traced the checkerboard squares of public land or needed to find the edges of your own property, you’ve seen those survey lines, which stretch perfectly straight across paper maps.

When I first learned this from David Icenhower, the digital guru of physical space in Washington State, I was shocked and equally surprised to discover that it’s someone’s job to maintain and update such a massive trove of data. As the record keeper for the Washington State Department of Natural Resources, Icenhower’s job includes finding and recording the corners of those original square-mile sections, ensuring that modern maps are accurate, and keeping track of places that haven’t been surveyed yet. He’s responsible for a catalog of more than half a million maps from the past 150 years, and he’s also responsible for making that archive—which is still used every day by everyone from government agencies to private homeowners—up to date. Bob Knuth, who manages Washington State’s Public Land Survey Office, tells me it would take a person 18 years to upload and understand all of the historic records and catalog the notes on sections divided into subsections and split into smaller plats. “It’s continuous work to quantify it,” he says. “But it’s important.”

This task is even more challenging because those original surveys were far from flawless. Imagine some dude on a donkey, 60 sections from somewhere, trying to keep his numbers straight. In Washington—what was then the Oregon Territory—they took measurements off the Willamette Meridian, one of 37 principle longitude lines in the U.S. They headed east and west from there, and worked south toward the guy coming north from the Humboldt Meridian, in what is now California. It amazes me that they even got close to lining up the squares with shaky hands and basic math, trying to account for the curvature of the earth.

All the same, Icenhower has to align the hand-measured structure of the past with the digital present to make sure landowners, hikers, Forest Service workers, and more are all referencing the same points when they look at current maps and boundaries. “The markers are the markers,” he says. “They can’t be shifting sands.”

But of course, things do shift. Rivers erode, trees fall down. We move mountains to build highways. Those posts the surveyors pounded in may rot or fall over. And then there were places that the initial surveys skipped entirely. In other words, Icenhower is working off inconsistent and occasionally inaccurate foundational data. He has to hold the dysmorphia of markers not quite lining up with reality or geography to overlay the present onto history and make them both as true as possible. Even if modern GPS says the corners aren’t exactly a mile away from each other, the initial markers are the legally binding points of property ownership, from federal land boundaries to neighborhood fences.

I found it fascinating that we continue to use such inaccurate maps to divide up our country today, and I became particularly obsessed with the idea of lost corners: places that had been erased or eroded by time or never made the map. I thought that learning about them, and maybe trying to track one down, would be a kind of geographic treasure hunt, a fun way to try to understand how maps shape our understanding of space.

I ask Icenhower whether I could go look for a lost corner. “Yes, please,” he says, laughing. He shows me a picture of one a hiker recently found: a washed-out piece of rebar with a brass cap that they’d noticed on a rarely traveled piece of Washington Department of Fish and Wildlife land. “We wouldn’t have known it had gone missing if they didn’t tell us,” he says.

Over Zoom he pulls up an image of the un-surveyed Oregon Territory township 37, and helps me find the area on my Google map, to show me some of the gaps and the places that aren’t accurately surveyed. “It’s Mount Baker,” he says. “We still haven’t surveyed that yet.”

There’s something neat about that, he says—that there are still places we don’t fully know. And that someone like me might find something, some lost corner, and correct the map.

17 COOLEST Devices For Males That Are Value Shopping for TECHNIFY

The Humble Minivan Is Due for a Rebrand

Grant County is Launching Grasp Planning Course of for Outside Recreation...

Rating a pair of highly-rated Etekcity Tenting Lanterns at $6.50 every...

“An ant climbing up a chilly mountain:” Jaire Alexander continues to...